“We need to be remembered for our passion and purpose, not our pink pussycat hats.”~Petula Dvorak

In a heart-breaking negation of the core concept of January 21’s Women’s March in D.C., Jayna Zweiman and Krista Suh have launched a parallel project dubbed the “Pussyhat Project.” Zweiman and Suh aim to create “a powerful visual statement” at the Women’s March on Washington, D.C – a sea of pink “pussies” demanding “fair treatment” and “honoring the truth.” Their environmental visual seeks to eliminate the differences between the many diverse attendees and create a “community” of women all wearing matching, handcrafted “pussy” hats. 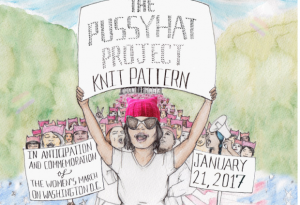 No doubt well-intentioned by the organizers and knitters, this project harms the March, as well as feminism, women and girls, and  victims of sexual abuse and feminism,.

“Pussyhats” compromise the mission and purpose of the March. The purpose of the January 21 March is to feature “diversity” and to “reflect our multiple and intersecting identities.” From its inception, the March’s design and leadership have sought to promote a wide variety of identity groups, “joined in diversity,” while equating “women’s rights” with all “human rights,” including the most marginalized in society. Empathy and love, often associated with the feminine, motivate the peaceful, nonviolence of the event, an event meant to be an obvious coalition of “diverse communities.”

Zweiman and Suh have organized a vast effort to mask this very diversity and create for every woman attending a bright pink “pussy” cap. This spectacle threatens to obscure the crowd’s diversity and upend the purpose of the March.

Worse, the “sameness” they seek derives from a vile, derogatory reference to women’s sexual organs. Creating a sea of “pussies” will dramatically change the impact of this event, giving commentators and the media an easy excuse to ignore the serious, often complex, issues motivating women to protest. Already, news outlets – like USA Today – seem sadly captivated with “pussyhats” rather than issues at the heart of the March.  Challenging women not attending the event to craft and donate thousands of these caps eclipses the opportunity to engage women everywhere in the issues targeted by each protester.

“Pussy” hurts women. Did Zweiman and Suh consider how hurtful and bullying the term “pussy” is for multitudes of girls and women? Fresh off a widely broadcast, triggering, derogatory use of the term by the President-elect, many women sincerely fear the new administration. They genuinely worry that feminism’s gains face reversal, along with a reassertion of a primarily sexual role for females, one based upon a uniform, male-driven scale of beauty.

In the aftermath of this controversy, some women have reportedly suffered hate crimes, taunted by catcalls and intimidation with the word “pussy” and related epithets. One college took action and called a post-election posting “with the message ‘Suck it up, pussies!'” a “targeted act of intimidation and cowardice.” This threat to the worth and dignity of each individual female concerns all women collectively.

Rather than soundly rejecting this derogatory hate term of harassment and objectification – and affirm women’s worth as a gender critical to the well being of society – Zweiman and Suh join the male, deprecatory voice to the March. They specifically acknowledge that “pussy” is “a derogatory term for female genitalia” but rationalize its use as a “term of empowerment.” How can slanderous objectification and stereotyping of women ever “empower” them to oppose their oppression and stand firm for their dignity and worth?

Now as before, women must refuse to be meek and guileful, for truth cannot be served by dissimulation. Women who fancy that they manipulate the world by pussy power and gentle cajolery are fools. It is slavery to have to adopt such tactics. ~Germaine Greer

The organizers’ claim that use of this vile word “empowers” women denies and invalidates the experience of women victimized by male verbal and sexual abuse. Yet the organizers and knitters are creating a social pressure and expectation for full inclusion in this community of women that everyone should don a “pussyhat.”  The very women who have compelling personal reasons to participate in this March – women sexually abused by men – might reasonably stay home, rather than deal with a long, triggering day of “pussyhats” and “pussy power.”

“Pussyhats” normalize sexualizing females. If the March draws the hundreds of thousands of women it envisions, media coverage will be abundant. Saturday evening news and Sunday talk shows will echo with debates about the sexualizing, pink hats and with open, uncensured use of the offensive “pussy” and “pussies.” Inevitably, there will be quips and snickering and offensive innuendo.

By Monday morning, every girl in the English-speaking world will know the reference and “pussy” will be a normal way of referring to a female whether in our elementary schools, colleges or workplaces. The “pussyhat” movement will have destroyed decades of work by courageous women – including victims of verbal abuse – by normalizing the derogatory term and purposefully injecting it into mainstream media as an appropriate reference to the female.

Imagine the harm Monday morning, as women across the country return to their workplaces and male colleagues – you know who they are – chide, “So, where’s your pussy hat?” or “Did your pussyhat keep your head warm?’   or “Did you have your head up your pussyhat?” How can an employer, teacher or manager address such nasty, derisive, sexual innuendo when women themselves normalized the word?

Even as I write, the subtle process of normalizing is apparent. The organizers fail to denote the pejorative nature of the word, typically reflected by a refusal to reprint the word in it’s entirety, e.g. “‘Suck it up p***ies!’ sticky note mocking anti-Trump students being investigated — as a hate crime.” Practically, to discuss the project, commentators, like myself, are forced to use the word as simply another noun.

“Pussyhats” trivialize crucial women’s issues. Finally, it must be observed that the “Pussyhat Project” smacks of affluence and privilege, myopically claiming knitting and crocheting as “traditionally women’s crafts.” While these crafts may well be fashionable in the organizers demographic bracket, only 1/3 of women even know how to knit or crochet. More, the average working woman, juggling job demands, family needs and life’s everyday stresses, is far more concerned with issues impacting daily life, such as childcare, medical coverage and job availability. The image of women leisurely sitting in supportive female circles whilst  knitting and crocheting through an evening is pure fiction for most women today.

This image is also frankly frivolous compared to the dire, pressing social issues with which girls and women desperately need help and support. Consider the children and women in the District of Columbia who, while the “pussyhat” marchers demand “fair treatment”, are trapped in sexual slavery.

Right here in the nation’s capital, our most vulnerable residents — children — are subjected to sex slavery. Their stories don’t make the evening news or even warrant blurbs in your morning paper. But human trafficking is, and has been, a shadowy and seamy part of D.C. life.

Sexual assault remains rampant in the United States, with 1 in 5 women saying they had been a victim, according to a 2011 survey. “Pussy” for these women and children, sexually enslaved and sexually damaged, is not “clever wordplay,” as Zweiman and Suh callously assert in their mission statement. “Pussy” is an intimate, private part of their bodies, which has been violated, commercialized, abused and wounded.

Women largely voted for Hillary Clinton out of concern for their rights as women. While 42% of women did vote for Donald Trump (including myself), their vote by no means signals satisfaction with issues of concern to women. Whether, like me, you are appalled by the killing of unborn girls and sexual trafficking of children or by the objectification of women as sex slaves or commercial wombs for hire, or whether you have other issues of concern such as pornography, unequal pay, access to education, the March is an opportunity to express both our concerns and our serious commitment to activism. As columnist Dvorak so eloquently said, “We can’t make a difference with goofy hats, cheeky signs and silly songs. This is our chance to stand up, to remind the world how powerful we are and demand to be heard. . . . We need to be remembered for our passion and purpose, not our pink pussycat hats.”

I urge Zweiman and Suh to scale back this ill-conceived project and discourage protestors from wearing “pussyhats.” I urge groups of women marching together to say “no” to this project and march as the serious-minded, worthy individuals they are. Let women’s concerns and solutions issue forth from this March, not over-shadowed by a pink, sexualizing, stereotyping scheme that commands press coverage.

For all questions regarding this site, please contact Marjorie Murphy Campbell at [email protected]