On January 2, 2007, Elizabeth Fox-Genovese, to whom this site NewFeminism.co is dedicated, died at age 65 after a long battle with multiple sclerosis. Her husband, Eugene Genovese, outlived her, dying on September 26, 2012 at age 82.  As far as I can determine, the elder Genovese wrote and published only one work of his own in the five and a half years he lived without his beloved wife – a slim, eloquent volume entitled Miss Betsey: A Memoir of Marriage. The cover photo of that book invites the reader to his tale of romantic devotion, surprising conversion and academic intrigue, told by the survivor of this highly visible – and controversial – intertwined pair of academics. 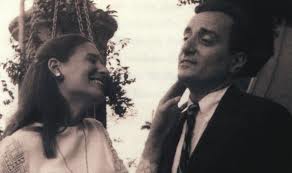 Genovese did not write about his marriage in order to share memories with their children – they had none.  Nor did Genovese seek to memorialize his wife’s thoughts – this she had ably done. (See, for example, the 5 Volume collection, History & Women, Culture & Faith: Selected Writings of Elizabeth Fox-Genovese). Rather, when she died, Genovese “felt driven to write about the life of a woman who led me out of the slough of despond and provided the loving home I wanted and badly needed.” (p.3) Genovese wrote of his beloved wife, it seems, more as an exercise to understand his own life, a life “split in two: Before Betsey and Since Betsey” – a life he had always hoped to have but found in Betsey “by the grace of God.” (p 2).

It is in this context that Genovese reflects on one of the more controversial developments in his wife’s thinking, when she decided she could no longer present herself “pro-choice” on abortion and, as a result, became target for the bitter backbite of fellow feminists and intellectuals.  But what Genovese found remarkable in his wife, her passion for unadorned truth and her love and compassion for women as women, has established a foundation upon which New Feminism continues to grow and flourish.

Abortion had always made Betsey queasy.  For years she remained sufficiently attached to the feminist movement to persuade herself to support “free choice” during the first trimester and with such limitations as parental consent and absolute denial of partial-birth abortion. She supported such “compromise” largely because she considered it the best politically available alternative to an incipient civil war.  She gagged on abortion for a simple reason: She knew, as everyone knows, that an abortion kills a baby. Betsey responded with incredulity to the argument that the baby a woman carries in her womb is not a baby at all or, alternatively, that although it is a baby, her mother has a moral and constitutional right to kill her. And Betsey resented the denigration of women implicit in the “pro-choice” campaign. Years later, in the private journal she kept as she entered the Church, she wrote:

Paradox: intent of abortion has been to free women, but it has imprisoned them. Anima Christi: soul and body are one, not two. Abortion devalues and debases woman’s bodies – strips them of their character as Temples of the Holy Spirit.  Abortion has not heightened respect for woman’s bodies, but only confirmed their status as objects to be used.

A related matter went down hard with her. We hear all the time that retarded and deformed children should never have been born – that their lives should have been snuffed out by parents and doctors sensitive to the “quality of life.” Betsey did not take well to people who claimed the privilege of judging who deserved to live and who ought to be put to death. Again, as a Jew aware of the underlying ideology of the Holocaust, she had no tolerance for people who claimed the right to dispose of human life in accordance with whatever sick creed they were espousing. Over the years, she met a number of retarded and autistic children. None struck her as floating miserably in a life without pleasure. Betsey saw for herself that, however painful their daily experiences, they awoke every morning secure in the knowledge that their parents loved them, considering them gifts from God.

The radical feminists’ assertion that a woman has absolute property in her own body provoked mirth from those who, like Betsey, knew that the modern Left had arisen to oppose the bourgeois theory of absolute property in anything. Betsey steadily hardened her line against abortion while she maintained unsparing compassion for the unmarried young or poor pregnant women who felt trapped. She spent years as a volunteer in community groups that cared for pregnant teenagers, poor mothers and their children, and battered wives.

On these matters, as in others, she had special powers of persuasion. I caught a glimpse of her ability to touch an audience in January 2005 – less than two years before she died. I attended her lecture on abortion at Hamilton College in New York. She had been invited by the small conservative student contingent, but she faced a large and largely skeptical audience. Once again, I thought she might have spoken in a livelier fashion; once again, she refused to indulge rhetorical tricks or cheap shots, much less talk down to students. She took up the major arguments, pro and con. Calmly, she reviewed moral, statistical, and other evidence and dug into the implications and ramifications of the slaughter of millions of infants. I watched the students closely. Apparently, most did not support her pro-life position, yet they hung on her every word. She may not have convinced many, but she clearly made them thoughtful. And they responded respectfully. It was obvious that their radical feminist professors had not deigned to introduce them to the pro-life side, so that they might “choose” between the alternatives. As the students left the hall, they did not disguise their admiration for Betsey’s presentation and replies to hard questions. They also made clear that they were not amused at their professors’ efforts to shut them out from an opportunity to consider pro-life views.

Miss Betsey: A Memoir of Marriage is available in hardcover.