Today marks the 75th anniversary of the Golden Gate Bridge – one of the great architectural Wonders of the World.  The arched bridge spans the one mile yawn of the San Francisco Bay from San Francisco to the Marin Headlands and includes walkways to accommodate the hundreds of pedestrians and cyclists who exercise and sight see from its famous orange frame everyday.

I can see the full expanse of this marvel from my living room.

It is much more than an architectural achievement.  It’s a lesson in the species – and the feats, frailty and unpredictability of humanity.  While my husband, and today’s celebration, focus upon the nuts & bolts engineering breakthroughs and man’s dominance over nature, I reflect on the human side of the bridge – the other side of the bridge – the interaction of frailed and flawed human beings with their own masterpiece.

1.  Human memory. Eleven men died during construction of the bridge – not because of callous disregard for their safety.  Ten of the men who died plunged into a newly designed, mobile safety net that had saved lives over the course of construction.  It was well designed to catch and save men.  It was not designed, however, to catch the scaffolding which fell with the men on February 13, 1937 and tore through the net.

You might think memory of the deeply tragic incident would run with the bridge but things do not remember, only people.  Sometimes people forget what they do not want to remember . . . which is why the 50th Anniversary celebration of the Golden Gate Bridge drew to a close with an enormous sigh of relief.

”Imagine the Golden Gate Bridge flattened out by the weight of human beings!”

Officials estimated that 250,000 people crowded the bridge deck Sunday morning to walk across the Golden Gate.  More than 500,000 others packed the bridge approaches, but were denied access by the authorities.

Mr.Giacomini said officials regretted that so many were turned away, but added, ”In a way, I’m grateful because if they had gotten out there, maybe the bridge would have fallen down.”

Sometimes, people do remember what they would rather forget.  This year, on the 75th Anniversary of the Golden Gate Bridge, organizers announced:

Marking the official 75th Anniversary of the Golden Gate Bridge, tens of thousands of participants are expected at the historic celebration along the San Francisco waterfront. 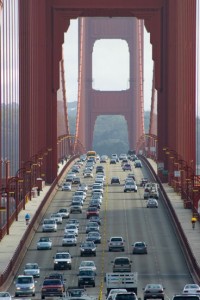 The flow is divided manually each day by a slowly moving crew switching yellow cone-like peg markers across lanes.  This does not, however, prevent head on accidents by confused drivers.  Nor do these highly visible, closely spaced markers stop people from making u-turns in the middle of the bridge.

“Marge.  I am stuck on the bridge.  Seriously stuck.  Traffic both ways is stopped.  Marge.  There is a woman trying to make a (expletive deleted) U-turn.”

The bridge authorities know this, too.  It has happened enough that they posted signs – hoping plain language will supplement where common sense fails.

3.  Fog.  Man may have bridged the gap between the city and her north neighbors but he’s yet to dent the fog.  You can drive the bridge, walk the bridge, travel to visit the bridge but, many days, you can’t see the bridge.  It’s a shock to some people. Tourist walking along water’s edge in Crissy Field: “Excuss me, we look for famous biddged.  We got map.  Map says biddged near to here.”

Me, wiping from my glasses the cold, condensed fog that I have been walking through for 30 minutes:  “I have good news and bad news for you.  The good news is that you are less than 100 yards from the Golden Gate Bridge.   The bad news is that you are not going to see the Golden Gate Bridge until this fog burns off.  I suggest you go that way (pointing), look up and you will be able to see the underside of the bridge.  Sorry.”

A disappointment to tourists, a nuisance to commuters, the fog keeps the bridge unpredictable and people, humbled.  From my living room, I have watched fog come and go over a day, moving in, under and about the bridge in every imaginable density and pattern, like a juvenile showing off, unable to hold anything back.  But I know the fog.  It will do something new tomorrow.

Personally, I am glad that the engineers have settled (so far) with fitting the bridge only with deep, resonating fog horns.  I worry they may one day affix a gigantic, fan system which will try to blow the mighty fog into Marin because the county needs the moisture.  For now, the fog prevails

The bridge, in all it’s engineering wonder, attracts a range of human events, tragedies and celebrations no one planned for, no one intended.  But it is these human events – the suicides, marriage proposals, small plane passes, and bungee jumping (to name a few) – that keep the bridge alive and the bridge authorities endlessly challenged by the humanity, the other side, of the bridge.  It is this side of the bridge I think about today on its 75th Anniversary.

One thought on “The Other Side of the Golden Gate Bridge”