Today I learned of a new effort to revitalize the “War on Women” rhetoric – a political strategy that sadly divides women into camps and polarizes discussion.  Now, it’s resulting in some clothing choices for babies . .

The apparent aim is coordinated rallies throughout the US on April 28 “to demand that every person be granted equal opportunities, equal rights, and equal representation.”  The sponsor appears to be the National Organization of Women, although the effort has its own Facebook page and website, www.UniteWomen.org.  Offered for sale in support of this event is a onesie for babies, sizes newborn to 24 months, in a wide range of colors, including mint green and light pink.  The onesie has this slogan on it: 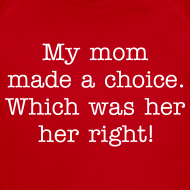 Included to sell this item is an advertising photo for the $20 onesie.

If a mom dresses her beautiful, chubby baby in a onesie that says “My Mom made a choice.  Which was her right!”, what is she trying to say to the world?  Perhaps – though I could be wrong – this is not a statement about the baby, but a statement about the mother, using the baby as her billboard.  It brings to mind onesies that read “Grandma’s Favorite” or “My Uncle Went to Maui” – slogans intended to state something about a relative of the baby.

But, of course, this abortion slogan is not at all like such onesies put on babies which spotlight the love for the child by a wide range of competing relatives.  The pro-choice abortion slogan emphasizes that the mother – not the child – is the holder of rights when it comes to who gets to be born and who does not.  The UnitedWomen.org onesie is a statement of power, not a statement of love, but I could be wrong.

Perhaps it is a statement of love.  A mother dressing her child in a $20 onesie that says, “My Mom made a choice.  Which was her right!” might say that this is a statement of love – a statement that “I loved you so much I did not abort you” . . . which brings to mind a conversation I had with a mother who regretted not having an abortion when pregnant with her first child.  She expressed earnestly that, in retrospect – though her daughter was now grown, married and a parent herself – she should have aborted that child and pursued a career for several more years so that, when her subsequent children were born, she would have a better employment history.

This, of course, is one problem with calling babies “choices” rather than facts or blessings or persons.  A baby birthed because the mother considered it a “good choice” when she had the baby, can just as easily conclude that she made a mistake and her child was, looking back, a “bad choice”.

I do not think that pro-choice women love their babies any less than their pro-life sisters.  But pro-life women do not think of their babies as choices – anymore than we think of crazy Aunt Ethel or generous Grandma Sally or incarcerated brother Bob as “choices”.  I do not think that babies – if they were given a voice – would be excited about wearing a onesie that tells the world their lives are mom’s choice.  I think babies would rather wear the onesies pro-lifers designed.  It only comes in pale yellow, but costs less at $12.97.  On this point, I am pretty sure that I am right. 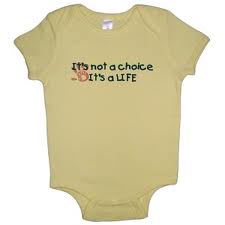 3 thoughts on “Which Onesie, Baby?”