Tobacco companies continue to market cigarettes like the brand Eve to women by associating smoking with an image of liberation, autonomy and even sexual independence and pleasure.   Ads like this one for Eve cigarettes seem ludicrous given the known hazards of smoking, a habit anything but liberating or sexy.

By and large, women simply know better now and view this corporate targeting of girls and young women for self-destructive consumption as offensive.

Or have we learned lessons from the tobacco industry’s lucrative exploitation of women?

Take Ella for example.  Watson Pharmaceuticals markets and sells Ella as an oral medication which, taken within 5 days of sexual intercourse, effectively disrupts or prevents pregnancy.

EllaOne tablets contain the active ingredient ulipristal acetate, which is a selective progesterone receptor modulator.  It works by acting on the body’s receptors for the naturally occurring female sex hormone, progesterone. It is not fully understood how this medicine prevents pregnancy. It is thought to work by preventing ovulation and fertilisation and also by altering the lining of the womb, depending on which stage of the menstrual cycle the woman is at.

One dose of this “hormonal inhibitor” can cause nausea and vomiting, dizziness and headache, abdominal and menstrual pain, as well as tiredness and mood swings.  More rarely reported side effects include kidney problems.

The dose sells for approximately $40.

Watson Pharma is anxious to develop and tap the female market on this product which promises a veritable treasure chest of cash.  Consider the short history of Ella’s cousin, Plan B, another “morning after” pill.

The popularity of the morning-after pill Plan B has surged in the year since the federal government approved the sale of the controversial emergency contraceptive without a prescription.  Plan B sales have doubled since the Food and Drug Administration authorized the switch for women 18 and older last August, rising from about $40 million a year to what will probably be close to $80 million for 2007, according to Barr Pharmaceuticals, which makes Plan B.

From the experience with female-targeted tobacco, women should fairly be asking a range of questions about this medication:  How does it work?  What affects does it have on my body?  Are there long term consequences to using one, two, three, even more, doses of Ella?  Can I get cancers or other diseases from using Ella?  Can Ella impact my future health, including my future fertility?  How does my access to, and use of, this drug impact my sexual partner, my sexual outlook and my emotional health?  Will I be more vulnerable to STDs?  Will Ella improve my sexual autonomy and control as promoted in its advertising? 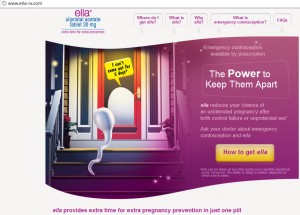 The immediate objection to the Ella-Eve comparison is that the U.S. Federal Drug Administration has approved the use of Ella as “safe” – while the U.S. Surgeon General continues efforts to convince the public that cigarette smoking is “unsafe.”  Women want to believe that the government – and its stamp of approval – offers the singularly significant reassurance to the female market that the product will not harm them and that women do not have to think about these questions.

But the FDA’s imprimatur is anything but convincing.  Here’s the undisputed reality:

1. “It would be fair to say that EllaOne is so new that not a lot is known about its mode of action, or possible long-term effects.”  “The manufacturers say that it ‘is thought to work by stopping your ovaries from releasing an egg’. They also state that ‘it may also alter the environment in the womb’.”

2.  “There are no long-term studies on the safety of [morning after medications] in women under 17, after repeated use or effects on future fertility.”

3.   “Ella should not be taken if you are already pregnant.  There is little information on whether Ella would harm a developing baby.”

What is the import of this reality?  This means that the FDA approval of the use of Ella is akin to approving smoking an occasional Eve cigarette – but even that single use may result in significant consequences, including impacting a current pregnancy and increasing likelihood of an unintended pregnancy and exposure to STDs.

The “unknowns” about Ella, like the unknowns about tobacco, have not slowed Watson Pharmaceuticals’ effort to convince females that Ella will keep their romantic sex-life healthy and happy while insuring their “eggs” do not go out to “play” with the sperm searching for its own “date”.  Their website features a handy “refer a friend” automated, personalized email feature so that girls and women can spread the word and enlarge the market.

Ella may, in time, prove to be an acceptable drug with no long term, deleterious impact on women’s health or the environment.  Or, once studied and understood, it may prove to a profoundly profitable pursuit targeting, creating and cultivating a female market upon which the long term health and even environmental consequences will prove dire – like cigarettes.   Is Ella an Eve in disguise?  It’s impossible to say – but it is not impossible to discuss if women of all faiths and political stripes would put down their agendas and talk about Ella the way we all talk about Eve.