Why do women today reject tobacco products that pollute air and body while embracing hormonal products arguably as harmful?

I suggest we talk about fertility controlling drugs like “Ella” with the same concerns and skepticism we discuss tobacco products like “Eve” – both products targeting females to create market demand among girls and young women.  In today’s post, I look at the development, sales and marketing of cigarettes, like Eve, and how women learned that, despite serious health consequences, they had been manipulated and duped into smoking.  Tomorrow, I will explain why we should be talking about products like Ella, a “morning after” pill, with the concerns and skepticism we learned from our disastrous experience with tobacco.

Since 1971, when the Liggett Group introduced the demurely named “Eve” line of cigarettes, some number of women have inhaled enough designer smoke into their lungs that they are now dead.  They have died from the cancers, heart disease and strokes associated with prolonged use of nicotine.  Since 1971, men, women and children who enjoyed the company of the now deceased Eve smokers have suffered discomforts and aggravated conditions breathing the very feminine Eve smoke blown their way. 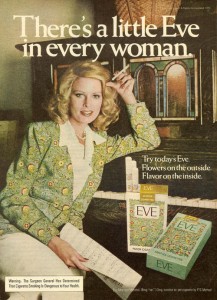 We all regard the imagery used to sell Eve cynically.  There is nothing feminine in a smoker’s cough or nicotine addiction, any more than a well dressed corpse wearing cute, tidy Tods.  We know this because of the tireless and focused efforts of thousands of tobacco opponents who, using media, litigation and advocacy, have exposed the shameless marketing techniques of “engineered consent.”  Creating demand among women by associating products with female liberation, independence and autonomy distracts from and neutralizes the (now) well known long term consequences of smoking.

The market for female-targeted cigarettes – like Eve – was first engineered when long term health and environmental consequences of smoking were unstudied and undocumented.  Tobacco companies continued to develop the market even as they ignored, denied and then concealed smoking’s long term impacts.  Author Allan Brandt has chronicled the industry’s lucrative success in coaxing females to choose smoking.

Many would link cigarettes with a new sexual accessibility among adolescent women, a marker of independence and autonomy . . . a symbol of beauty, glamour, and sexuality for women.  Women at colleges and universities quickly became committed to the important meanings the cigarette conveyed about them.  Smoking became a “choice” and a powerful symbol of breaking with convention.

Eventually, social policy took notice of both the long term consequences of smoking and the marketing stunts of tobacco companies.  While unable to illegalize smoking, social policies and initiatives developed to severely disfavor the “choice” to smoke, using steep taxes and graphic warnings while also tightly restricting smoking in public as well as advertising.

Today, a woman can choose to smoke, but she does so at substantial expense and fully informed that she places her future health and quality of life at risk.  Society frowns upon – even shames – her choice to smoke for its impact on her health as well as the impact on the larger environment.

Many of us who grew up as the dangers and deceit of Eve were stubbornly and slowly exposed now marvel at women’s willingness to ingest hormone-tampering drugs – like the morning after pill Ella.  Are these “liberating” sex-promoting, hormonal products – some of which are “as easy (for women over 17) [to obtain], as say, buying cigarettes” – the female nicotine of the 21st Century?   There are critical questions to ask and answer as girls and young women are vigorously targeted as a developing market much the way tobacco companies targeted and developed a market in cigarette smoking.  Indeed, the female-targeted pharmeceutical market is poised to explode.

Hormonally-based, fertility controlling drugs may become even easier to get than cigarettes as drug companies convince government to mandate their availability to women free of charge.

In tomorrow’s post, I propose that we apply the lessons learned from “the glamour and autonomy” of female-targeted cigarettes to the developing, hot market for “sexually liberating” hormone-tampering drugs like Ella.  Just how much do we actually know about the impact of these new drugs – marketed to promote independence and power in a woman’s sex life – on a women’s long term health and on the health of the environment?

3 thoughts on “Talk About Eve”